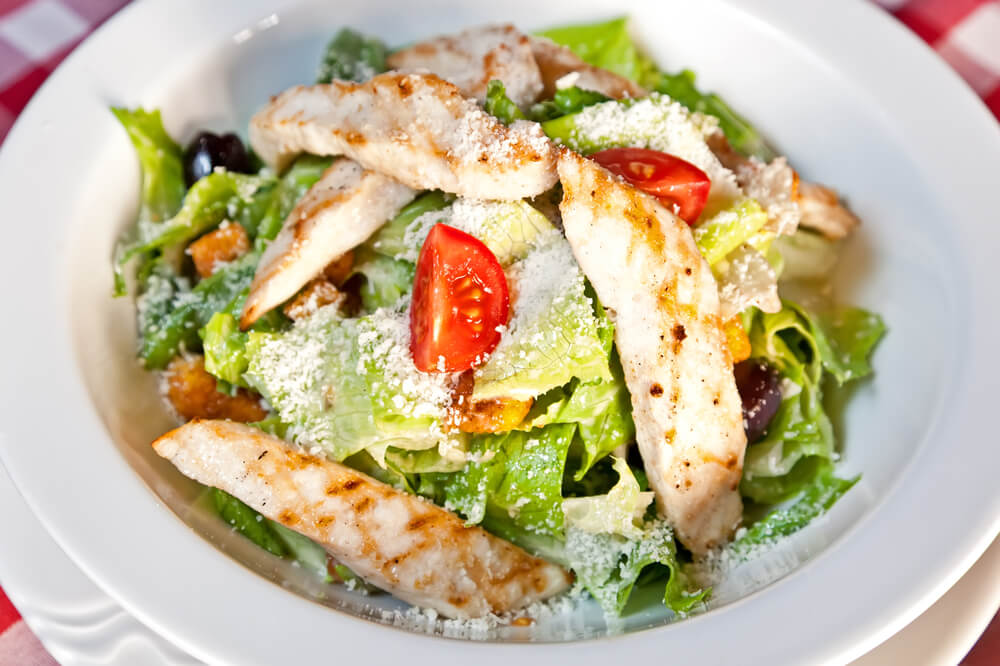 Caesar is likely the most well-known type of salad worldwide. Still, most people don’t know anything about Caesar Cardini, where caesar salad was invented, or many other essential details about the history of caesar salad.

If you’re a fan of this cold, healthy meal, you’re in the right place to learn more about it.

We’ve put together an article that explains the caesar salad origin. So wait no more, and start reading. You’ll learn a few interesting facts you can mention next time you’re having lunch with your friends or coworkers.

And those who wish to try the best caesar salad in Miami, make sure to visit Glass & Vine.

This unbelievable-looking restaurant has the most fantastic food, but the venue will impress just as much.

Who Invented the Original Caesar Salad?

The original caesar salad was created by an Italian man called Caesar Cardini.

The invention, however, didn’t happen in Italy or anywhere near. Although Caesar was born in the northern part of the country, he made his way to America, where he worked as a chef in many restaurants.

Eventually, Cardini started opening his own restaurants, and it’s known that he operated at least two joints before inventing the original caesar salad. That moment in history, however, happened somewhere and sometime else.

When Was Caesar Salad Invented?

The history of caesar salad begins in 1896 – the year Caesar Cardini was born. His life and journey are the only reason we have this recipe the way it is today, and without all the ups and downs on his path, who knows if the invention would have ever happened?

Though it’s not that simple to find much information about a chef who lived over a hundred years ago, we have enough evidence about Caesar and his role in the caesar salad origin story.

For example, we know about the advertisement for Cardini’s restaurant from 1919. It states that the business moved to California in the 1910s.

According to the early records, Cardini’s first joint venture happened in Sacramento. Also, we know he worked in San Francisco for a while throughout his career, more precisely, at the Palace Hotel. And Caesar later opened another restaurant, this time in San Diego.

However, the fulfillment of Caesar’s American dream came to a stop in 1920. Prohibition came and ruined most of the business in the restaurant industry around the country. However, this setback caused the most significant breakthrough in the young chef’s life – the invention of the caesar salad.

Now, it’s time to learn about the next step on his journey and answer the question, where was caesar salad invented?

Where Was Caesar Salad Invented?

Alcoholic drinks bring a large portion of the profits into any establishment that serves them.

As you may assume, the restaurant industry took quite a hit when prohibition began, and alcoholic beverages were no longer available.

So, the star of our story – Caesar Cardini, did what everyone else thought of. Tried to find a place where the new rules could be avoided.

That’s how he ended up in Tijuana, Mexico.

The story of the caesar salad origin was told by his daughter, and as she claims, it was a lack of ingredients that led to the invention.

According to Rose, her father was cooking at his restaurant in Tijuana, and after missing a few things, he put together a new dish which ended up being his most famous recipe. And one of the most popular dishes in the world today.

Naturally, this isn’t the only origin story we know of when it comes to this salad recipe. Other sources say that Alex, Caesar’s brother, was the actual inventor of the salad. Though Alex did end up opening his own restaurant in Mexico City, there isn’t much evidence that supports these rumors.

Still, the caesar salad origin story has even more complications. Some people believe that Caesar actually stole the idea from his employees. According to them, the workers created the recipe, but Caesar got all the credit for it.

We can never be sure which of these stories is true, but we do know one thing.

The answer to the question “where was caesar salad invented” – is Tijuana. Though many Italians will find this hard to accept, it is the cold and hard truth.

What Happened With the Cardinis?

After their time in Mexico, the Cardini family moved to Los Angeles. This is where they patented the family recipe in 1948. That recipe is still sold as Caesar Cardini’s Dressing.

Because of the family’s move to the States, we know a few more interesting facts about the original recipe and how it changed over time. For example, one of the main ingredients wasn’t a part of the mix back in the day.

You guessed it – anchovies didn’t make the cut at first. According to Cardini’s daughter, that is. She claims her father was against having fish in his salad. The slight anchovy flavor actually came from Worcestershire sauce, not the fish itself.

Lemon Juice Was Introduced Later On

Nowadays, it’s hard to imagine a caesar salad without freshly squeezed lemon juice. However, that wasn’t the case at the beginning of the recipe. Instead, fresh lime juice gave the mix a citrusy flavor.

Other Changes Were Made Throughout History

Cardini’s daughter said in the 1970s; many changes happened to the recipe. For example, the original caesar salad included whole lettuce leaves. And they were meant to be eaten with the fingers by lifting the stem.

Italian olive oil and coddled eggs were also a part of the mix. And when it comes to the anchovies, they weren’t physically present in the bowl, but they were an essential part of the sauce.

We May Never Know

Though most of these stories have a base, and we have a decent idea about the history of Caesar salad, we may never know the real story. Who knows, maybe the brother’s claims were true? Or, perhaps the workers did end up with nothing but came up with everything?

Regardless of how it all began, this recipe created one of the most famous meals in the world today that’s lowed and ordered all around the globe.

Caesar salad is a dish you can find in pretty much any restaurant in the United States. However, not all Caesar salads are equal. To try the best Miami has to offer, visit Glass & Vine.