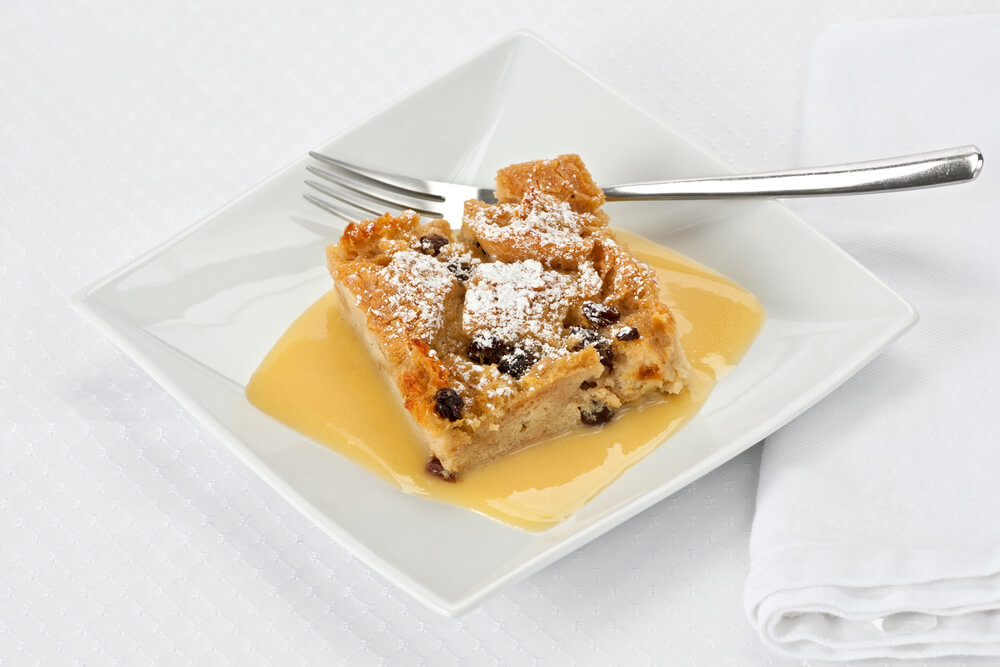 Have you ever craved to know how to prepare various vegan sweets, but you never knew where to start? Today is your lucky day because we’ll help you master the skills and teach you how to make a delicious vegan dessert, a vegan bread pudding. And did we mention it is super simple to make? Yes, it is. You won’t sweat making this vegan bread pudding, and you’ll fall in love with its flavors.

Bread dessert recipes are one of our favorites, and we love making them, and you will also love them soon.

There are many vegan sweets out there that will blow your mind, and some of them are effortless to make, while others require a certain number of skills. But none of them are this tasty and simple to make at the same time. And what’s even better is that you’ll only need seven ingredients for this vegan bread pudding recipe that you probably already have at home.

Bread dessert recipes are great because they are delicious, but you also get a chance to use up stale bread and reduce food waste.

The bread pudding recipe is one of those recipes that every household has, but today we’ll make a twist and make a vegan version. You don’t have to use eggs in a bread pudding recipe; you can easily substitute them with a flax egg. Instead of cow milk, you’ll use plant milk of your choice and coconut oil instead of butter.

Usually, people will put bread pudding into the bread dessert category, but you can eat it also for breakfast if you feel like it.

Depending on your preferences, you can serve it with a simple sugar glaze or a scoop of vanilla ice cream. Whichever option you choose, you won’t make a mistake.

This is one of the most straightforward bread dessert recipes you’ll ever find, and the ingredients are those that you’ll quickly find in your pantry or sitting on your counter.

Vegan sweets sometimes can be a little bit intimidating. Typically, there are some ingredients that people are not so familiar with, and it often results in giving up in even trying to make some vegan sweets. But this vegan bread pudding recipe is straightforward, and it doesn’t have any unfamiliar or challenging to get ingredients.

Here are some of our tips that will make preparing this recipe even easier:

In our book, vegan bread pudding is one of the best vegan sweets out there, and after trying this recipe, we hope you’ll agree with us.

3 cups of unsweetened plant milk of your choice

Chop the bread into cubes, and place them in a large mixing bowl.

Add milk, sugar, coconut oil, ground flaxseed, vanilla extract, and cinnamon into a blender, and blend everything until smooth. Alternatively, you can mix everything in a mixing bowl with a whisk.

Pour the mixture over the cubed bread, and stir everything well. Let the bread pudding mix rest for a minimum of 1 hour, at room temperature.

Place the mix into a 9×9 inch baking dish and bake for 60 minutes. Depending on your oven, the baking time can vary, so you should look out and check the pudding after 45 minutes. You should bake it until the crust is formed and the pudding is golden brown and cooked inside.

Remove it from the oven. Before serving it, let it sit on the countertop until it slightly cools off.

Once it’s a bit cooler, you should serve it with a scoop of ice cream, or even two, and enjoy.

You can eat it even cold, and it will taste perfect. And the leftovers are also good, even a few days later if kept in the fridge.

We believe that you won’t be disappointed with this vegan recipe, and once you make it the first time, you won’t stop. It’s perfect for the holiday season, but also the weekends. And those days that you don’t want to wait in front of the oven, you can visit us at Glass & Vine and enjoy our tasty desserts. Our dessert menu will satisfy even the most demanding sweet lovers out there, and our scenic view of the sea will add to the enchanted atmosphere.