History of a Shrimp Cocktail Sauce & How to Make It 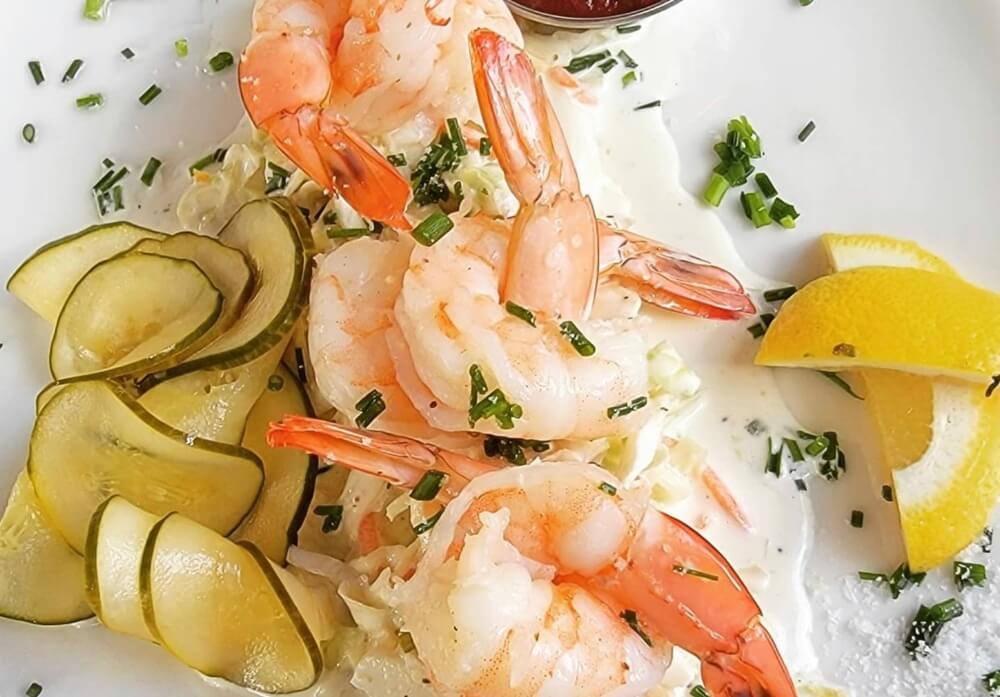 As we presently know it, historians can trace the shrimp cocktail origin back to the late 19th century and early 20th century. American 20th-century cookbooks report combinations of shellfish (typically oysters) and spicy tomato-based sauces (ketchup spiced with cayenne, tabasco, and horseradish) served as appetizers. “Cocktail” appetizers, typically fruit or shrimp cocktails, were standard in the 1920s, also called the decade of prohibition. They would serve these appetizers in cocktail glasses primarily meant for holding alcoholic beverages. The method of serving came about to give these glasses a new use, and obviously, the process has stuck.

Meanwhile, the British culinary landscape engrains the shrimp cocktail, so much so that most people think the dish’s invention originated in Britain. According to a more believable story, however, the shrimp cocktail in a glass traces back to a 19th-century miner in the US state of California. Legend says that this miner went to a San Francisco bar with his gold nuggets after a successful day and ordered whisky, together with a plate of oysters.

He then knocked down the whisky, tipped the oysters into the empty glass, and doused it with vinegar before sucking them down. The spectacle astonished the restaurant owner, who inquired the name of what he had just done. “An oyster cocktail,” the miner replied. The following day, an advert for Oyster Cocktails stood in the restaurant’s window. Every West Coast bar and café was selling seafood cocktails in a few weeks, creating a fantastic story around the shrimp cocktail origin today.

How to Make Shrimp Cocktail Sauce

The easiest way to make a shrimp cocktail at home super quickly is by buying some pre-cooked shrimp together with a cocktail sauce. Then, serve it for the family/friends. But, whereas there’s nothing wrong with that, you can also learn how to make shrimp cocktail sauce for an authentic steakhouse experience at home.

How to Make Cocktail Sauce: Steps

The essential component that the cocktail sauce uses is the Court Bouillon, a poaching liquid that both cooks and flavors the shrimp. We dip – and mark the word dip – not luxuriously soak the shrimp into it. Follow this simple recipe:

So, how to make cocktail sauce Court Bouillon? Place all the above ingredients into a stockpot, bring the mixture to a boilover, and reduce the heat to a gentle simmer. Continue to simmer for at least 5 minutes.

In a sense, shrimps are somewhat temperamental. Therefore, upon cooking them in the previously mentioned Court Bouillon, plunge them into an ice bath. The ice plunge is a critical step meant to stop the cooking process.

Now the real show begins! Beware, though, the size of the shrimp and its quality matter as well. Also, the fresher the shrimp, the better the results will be.

You can find many recipes for cocktail sauces in cookbooks for those who like to go the old school route, but there are plenty on the Internet as well. Find one that suits your taste. Otherwise, it can involve a mix of ketchup and mayonnaise, lemon juice, etc.

If you’re interested in trying the shrimp cocktail and enjoy the experience of having it served in a fancy glass, don’t hesitate to pay us a visit at Glass and Vine restaurant. We are happy to show you the true pleasures of a delectable menu. Located at Coconut Grove right by the sea, we can promise a remarkable and relaxing environment that will complement the dining perfectly. We deliver delicious food, great drinks, and an oasis-like escape from the city’s hustle and bustle at Glass and Vine.

How to Make Grilled Salmon and What to Serve With It

Best Brunch Dishes You Should Try