What Is a Secret of a Great Peruvian Shrimp Ceviche 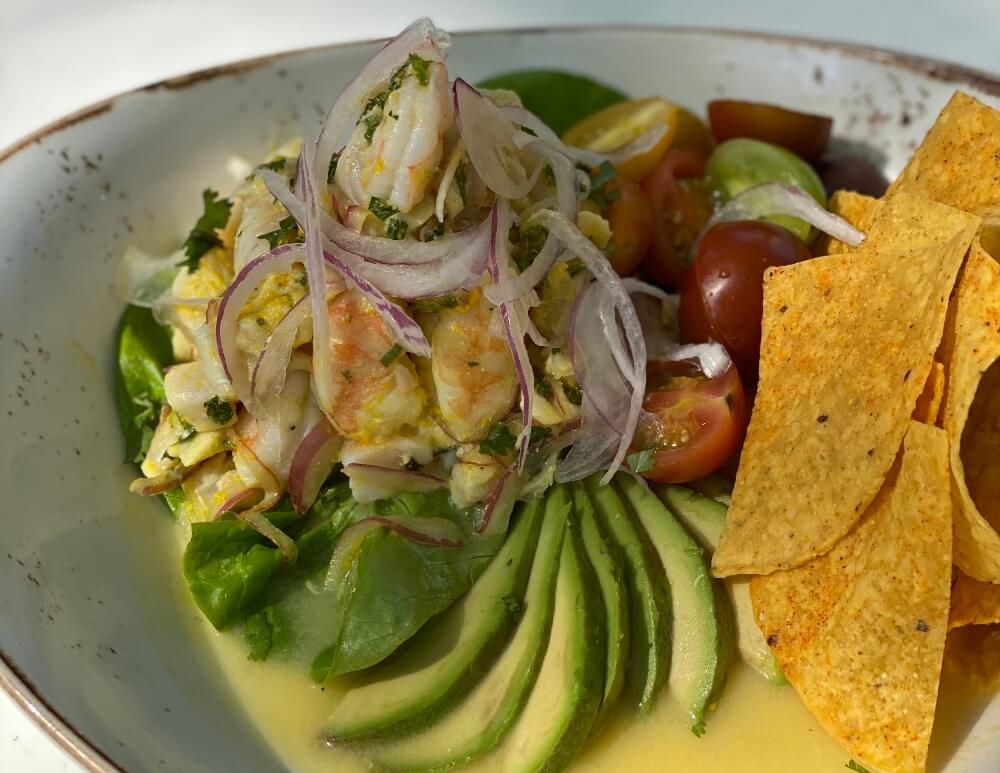 So, what is ceviche? Ceviche, also spelled as Cebiche, Seviche, or Sebiche, is a citrusy seafood dish popular throughout the coastal areas of Latin America, including Colombia, Chile, Mexico, and Ecuador. Although there are disputes about the exact origin of this seafood, many can trace its roots to Peru, where shrimp ceviche is one of the most famous dishes to this day.

In its simplest form, a shrimp ceviche recipe consists of fresh raw fish cured in lime juice or lemon, with some hot peppers or chili. And thanks to the shrimp ceviche ingredients, this dish is rich in protein and nutrients, definitely a great appetizer.

The Secret of Peruvian Shrimp Ceviche

Therefore, if you’ve been wondering what the secret of a great Peruvian shrimp ceviche is, it’s in the way they prepare it, including the shrimp ceviche ingredients used for the recipe.

To put it simply, the secret of a great shrimp ceviche recipe lies in blending the native ingredients that seemingly don’t pair well together.

How to Make Shrimp Ceviche?

Although the ceviche shrimp recipe is prevalent in all Caribbean countries, Peru claims the original shrimp ceviche recipe, thanks to Gaston Acurio, the famous Peruvian chef. He popularized this dish by touting its traditional flavors. Acurio also created many ceviche shrimp varieties in his restaurants in Peru and throughout the world.

Were it not for Acurio; shrimp ceviche would perhaps still be a regional dish specific to South America. And when we discuss how to make shrimp ceviche Peruvian style, we have to focus on the three main ingredients.

The first crucial ingredient is raw fish. After all, what is ceviche without the seafood, right? Of course, your favorite and preferred type of fish can work, but since we’re talking about how to make shrimp ceviche here, let’s say that your raw fish of choice will be shrimp. Shrimp is relatively light, so there’s no need to worry too much about the shrimp ceviche calories. Proceed to chop it into tiny chunks, and add liquid after that.

The following essential ingredient for a ceviche shrimp dish is some citrus juice. Since the Spanish imported citrus 400 years back, the most traditional Peruvian ceviche uses fresh lemon or lime juice. Before then, ceviche consisted of raw fish, salt, and chili peppers.

Today, however, what makes Peruvian shrimp ceviche great compared to others is the lime they use. In Peru, Chefs widely use a lime variety called Limon Sutil. It’s smaller compared to the Mexican limes and a bit larger than the key lime. In addition, this Peruvian lime has a higher level of acidity compared to Mexican limes. Consequently, it’s able to “cook” the raw fish comparatively faster. Its flavor is, however, very similar to key lime.

Aji chili pepper is the third ingredient, and it’s the last piece of the secret for making a great Peruvian shrimp ceviche recipe. Aji, a yellow and orange-colored chili pepper, grows in nearly every part of Peru. The hotness of typical yellow aji chilis is 40,000 to 50,000 on a Scoville scale. By comparison, jalapeño peppers lie between 2,500 and 8,000 Scovilles.

Overall, several Aji varieties grow in Peru, each with varying degrees of hotness, giving Peru’s shrimp ceviche recipe a wide range of tastes. So what is ceviche without the spicy touch? The go-to pepper choice is aji limo that has a semblance to habanero. Aji Amarillo, a milder type of hot pepper, is also famous.

Shrimp Ceviche from Peru tends to marinate in lime juice for a shorter period. In addition, the use of spicy hot peppers is far more common in Peruvian shrimp ceviche compared to ceviche in other Latin American countries and elsewhere. Another unique attribute in Peruvian cuisine is that they remove the lime juice used to ‘cook’ the shrimp and, consequently, serve shrimp ceviche as a flat plate salad. If you’re paying attention to your diet, you’re in luck as 1 cup amounts to about 128 shrimp ceviche calories.

In the mood for some delicious shrimp ceviche bites? If that’s the case, please pay us a visit to our Glass and Vine restaurant. Miami’s Coconut Grove is home to our fabulous restaurant. Next to the sea, surrounded by luscious nature, you can enjoy food brought to you. The setting and the menu make our restaurant a true haven for those looking for a supreme dining experience and a getaway from the city’s hubbub.